A command-line tool which simplifies the task of updating your Flutter app's launcher icon. Fully flexible, allowing you to choose what platform you wish to update the launcher icon for and if you want, the option to keep your old launcher icon in case you want to revert back sometime in the future.

Want to see older changes? Be sure to check out the Changelog.

Add your Flutter Launcher Icons configuration to your pubspec.yaml or create a new config file called flutter_launcher_icons.yaml. An example is shown below. A more complex example can be found in the example project.

If you name your configuration file something other than flutter_launcher_icons.yaml or pubspec.yaml you will need to specify the name of the file when running the package.

Note: If you are not using the existing pubspec.yaml ensure that your config file is located in the same directory as it.

After setting up the configuration, all that is left to do is run the package.

If you encounter any issues please report them here.

In the above configuration, the package is setup to replace the existing launcher icons in both the Android and iOS project with the icon located in the image path specified above and given the name "launcher_icon" in the Android project and "Example-Icon" in the iOS project.

Shown below is the full list of attributes which you can specify within your Flutter Launcher Icons configuration.

Note: iOS icons should fill the entire image and not contain transparent borders.

Listed a couple common issues with solutions for them

Generated icon color is different from the original icon

Caused by an update to the image dependency which is used by Flutter Launcher Icons.

Image foreground is too big / too small

For best results try and use a foreground image which has padding much like the one in the example. 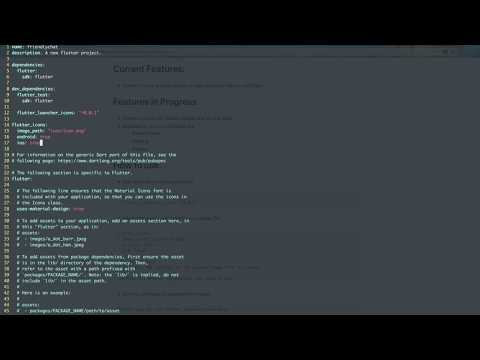 Use this package as a library

Add this to your package's pubspec.yaml file:

You can install packages from the command line:

Alternatively, your editor might support pub get or flutter pub get. Check the docs for your editor to learn more.

Now in your Dart code, you can use:

We analyzed this package on Jun 5, 2020, and provided a score, details, and suggestions below. Analysis was completed with status completed using:

A package which simplifies the task of updating your Flutter app's launcher icon.

Packages that depend on flutter_launcher_icons